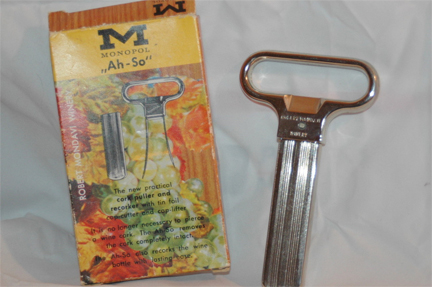 Above: We may never know the true etymon of the brand name “Ah So” but I’m working on it! See below (image via Bonanza).

My good friend and super cool dude Evan Dawson gave me and Sotto (the Los Angeles restaurant where I curate the wine list) a shout out today in his excellent post on corkage for Palate Press.

Corkage is such a delicate and often emotionally charged issue in our country. That may sound like an overstatement but it’s really true. As Evan notes in his piece, when someone brings in a bottle of Valdicava Brunello di Montalcino to Sotto, shows it to me or Rory, and asks us (with an air of condescension, of course) if we are “familiar” with this wine, it’s like a punch to the gut. Does it not occur to them that our heart and soul has gone into the selection of wines to pair best with the chefs’ food? Of course, we just smile and open their shitty, overpriced barriqued wine for them. They might as well be drinking KJ (and they often do). But it doesn’t mean that it doesn’t hurt. It just means that we’re professionals. 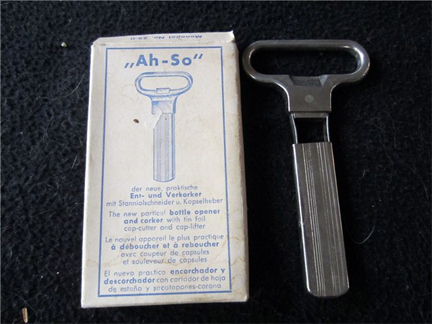 I’ve been working on a magazine piece on Italian wine basics, including a note on corkscrews. The gig led me back to an etymological conundrum that I have yet to resolve: the origin of the name “Ah So.”

In my research over the weekend, I discovered that the reason why we call pronged corkscrews Ah So in this country is that the “butler’s friend” (as it is often called) was first marketed in the U.S. by a German company, Monopol, who called it the Ah So. The Ah So was one of many names used by Monopol, who had also called it the “Ah-Ha.” Another German company in the 1930s had called it the “So So.” And the Atelier Saint-Germain had marketed another version around the same time as “A.S.”

It just so happens (sorry for the paronomasia) that the Monopol was the one that became so popular in the U.S. The earliest mention I’ve discovered is in a November 1970 issue of The New Yorker, where it is referred to as a new product in the U.S., used by European sommeliers.

My philological hunch tells me that Monopol was trying to imitate the proprietary name of another successful marketer of the device.

My dissertation advisor didn’t call me the bloodhound for nothing!

#surreal but very exciting. Thank you @docmaremmatoscana and @ieemusa for making me part of this “historic” event.