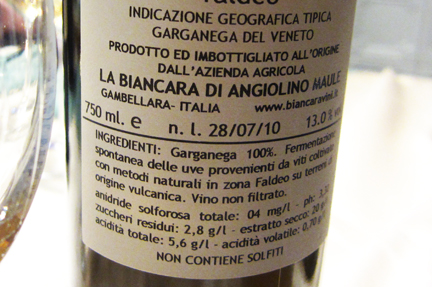 Above: The wines of Angiolino Maule (La Biancara) are impeccably Natural. We tasted with him in early February at the winery in Gambellara. Note how his label reports the amount of “anidride solferosa” (anhydrous sulfur dioxide or SO2) and note how the label reports “NON CONTIENE SULFITI” (“does not contain sulfites”). Not all of his wines are unsulfured (I’ll devote an upcoming post to how he obtains his unsulfured wine).

Invariably, when a group of food and wine professionals gets together, they will talk about food, wine… and poop. Naturally, the three phenomena go — how can I say this? — hand in hand.

Such was the case on Wednesday night at Lou on Vine when Zach (whose new restaurant will be opening shortly in Los Angeles) described his pooping issues while working at a restaurant in Italy and subsisting on a diet of boiled salame, polenta, and potatoes. He only managed to “liberate” himself (so to speak) once a week, he said.

Above: I really dug this 2009 Manzoni Bianco by Foradori that I tasted at a trade tasting yesterday at the top (and coolest) wine shop in Los Angeles (in my book), Domaine LA. (The label is smudged because it had been in-and-out of the rep’s wine bag all day.)

When I told him that I thought that Natural wine could have helped him, even Natural wine fanatic (and in my opinion, authority) AW was incredulous.

Maybe because of my ethnicity (you know why it’s called IBS don’t you? Isaac Bashevis Singer syndrome), good pooping is very important to me (come on, it’s important to everyone, isn’t it?). One of the first things Tracie P asks me when we message each morning while I’m on the road is: “how’s your pancia today?” (pancia means belly in Italian and is our euphemism for life’s daily miracle). 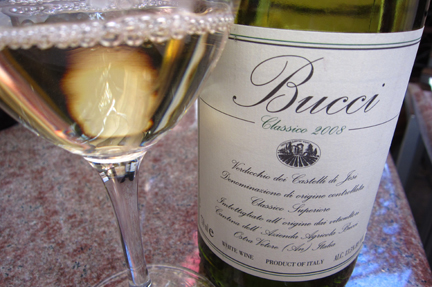 Above: Some might argue that Villa Bucci is not a Natural wine producer. And, in fact, sig. Bucci probably wouldn’t use the term “natural” to describe his wines. But the wines are grown using chemical-free healthy farming and vinified using native yeasts. Either way, I can tell you that it’s a good wine for pooping. Also tasted yesterday at a trade tasting. One of my all-time favorite wines.

The bottom line is this: I have no hard data (aren’t you glad for that?) but I can report anecdotally that when I drink Natural wines — even when accompanied by heavy foods, as they often are — I nearly always poop well the next day.

Why is this? Probably because the wines aren’t packed with chemicals and the alcohol tends to be more balanced. The generally higher acidity certainly helps with digestion (the same way acidity in wine can tenderize meat when used to marinate). And everyone who has tasted wine while still active (i.e., with active yeast, still fermenting) knows that if you drink to much (even a healthy glassful), the wine acts as a purgative.

If you don’t believe me, take it from the 2,000-year-old man, another correligionary of mine. To what does he attribute his longevity? He never touches fried food, he never runs for a bus… and he drinks natural wine.

What a gorgeous and delicious bottle of wine #oldschool #mykindachampagne Thank you again for sharing this @thedrunkencyclist!