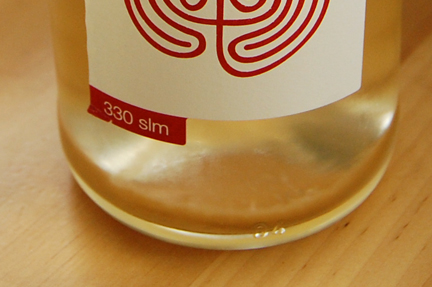 Above: Costadilà is a member of new group of winemakers who make “Prosecco colfòndo.” Note the sediment at the bottom of the bottle (photo taken on our dining room table).

Thrilling news of a new group of Prosecco producers who make their wines colfòndo (con il fondo, i.e., aged on their lees and thus with sediment) came to my attention via Mr. Franco Ziliani’s brand spanking new blog devoted to the world of Italian sparkling wines, Le Mille Bolle (A Thousand Bubbles).

In many ways, Prosecco is the wine that started it all for me so many years ago when I started writing about wine. Back in 1998 when I got my first gig as an enojournalist, it was with a feature story on Prosecco. I know the appellation well because I spent three summers touring the provinces of Treviso and Belluno with a cover band.

To my palate, lees-aged Prosecco is the real Prosecco (not the yeasted banana candy crap that we see too often in this country). Lees-aging gives the wine the saltiness that makes Prosecco raised in Valdobbiadene stand apart from the crowd. I love it and am dying to taste more. 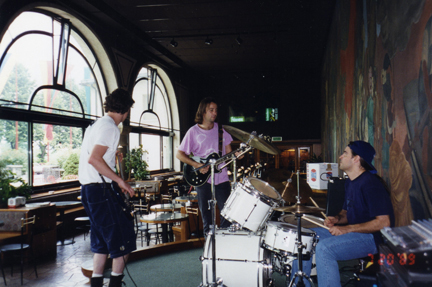 Above: That’s me in the middle rehearsing in the famous Birreria at Pedavena where we played 4 sets a night, 3 nights a week (no kidding). I was in my 20s and the music and beer (often unpasteurized, btw) flowed all night long. How do you like the hair?

Dulcis in fundo (pun intended): one of the producers, Riccardo Zanotto, used to come hear us play back in the day and we shared more than one beer together…

Che bei ricordi! What great memories of rock ‘n’ roll with the Dolomites as our stage and salty, gritty, utterly delicious Prosecco!