Here’s another post from my recent trip to Italy during the second and third weeks of September, 2010. I’m slowly making my way through Tuscany, then the Veneto, and then Friuli. Thanks for reading! 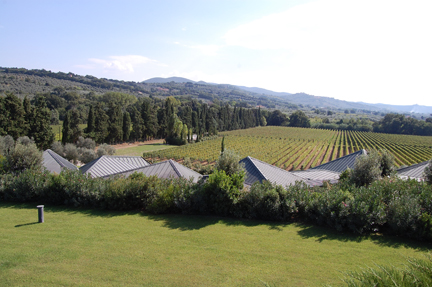 Gaia Gaja drives fast. I could barely keep up with her… she in her Audi Quattro station wagon, me in my Renault Clio rental! After we finished our tasting and tour at her family’s Pieve di Santa Restituta property (a fascinating visit), we drove in tandem toward the coast, where we ate lunch in San Vincenzo at a restaurant that I highly recommend, if not for the food then for the cast of characters who await you). In the wake of our Fellinian repast, we headed from San Vincenzo toward Castagneto Carducci and her family’s Ca’ Marcanda winery. 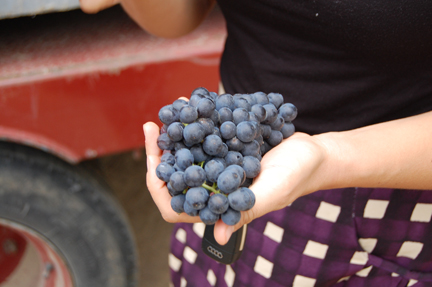 Above: We stopped to chat with the vineyard manager whose team was picking Syrah that day (Monday, September 13).

I’ve visited some impressive wineries in my time as an observer of Italian wine and the people who grow and produce it (Soldera is at the top of that list, of course, and I’ll be posting on my incredible visit to Zidarich toward the end of this series). But Gaja’s Ca’ Marcanda stands apart, a winery sui generis.

As a rule, winemakers design their wineries and winemaking facilities with functionality as their guide. Aesthetics are no afterthought but beauty is trumped by the business of making wine, the nuts and bolts, as it were, of presses, vats, casks, bottling lines, etc.

When Angelo Gaja conceived the Ca’ Marcanda facility, he turned this notion on its head: the germ was an aesthetic ideal and the functionality and process of wine came in its wake.

Above: Everywhere you turn in the winery, you find objets d’art, like these movable wood sculptures by Astigiano artist Sergio Omedé.

As we toured her family’s winery together, I noticed that everyone we met — from the receptionist to enologist Guido Rivella — had a smile on their face, a bounce in their step, and a kind word to share even in the industrious hum of their daily toil. This place — this enotopia (how’s that for a neologism!) — is so violently beautiful to look at, with something interesting to gaze upon at every corner. It’s no wonder the staff enjoys showing up for work every day.

Above: One of the many sculptures in terracotta by architect Giovanni Bo (Gaja’s longtime collaborator).

It occurred to me that Gaja’s Ca’ Marcanda property, the third in the Gaja tripytch, is the fulfillment of an Oedipal cycle.

In Montalcino, Gaja bought what may be the oldest continuously operating estate in the appellation, with a church that dates back to the 7th century C.E. There, too, he is bound by strict appellation regulations and an entrenched however youthful enologic tradition. There, he is painstakingly restoring the beautiful house of worship and making wines that do not attempt to redefine the place but rather sing the notes of Sangiovese to the tune of Gaja elegance.

In Bolgheri, Gaja built a winery from scratch, on an estate that never produced fine wine until he arrived. Here, he was free to express his creativity, quite literally and figuratively, in an appellation where the rules have yet to be written (all of the Ca’ Marcanda wines are Toscana IGT). Gaja’s own ars poetica was the only chain to bind him and like a great poet, he has created his own language, a brave and new idiolect. Truly fascinating…

Above: I regret that ability as photographer do not do justice to this amazing working space. That’s winery as seen from the backside. It’s virtually invisible to the outside world.

When Gaia showed me the main floor of the winery, where vinification, aging, and bottling take place in one open space, I noticed that the bottling line was enclosed in acrylic. Her father wanted one open space for the main room of the winery, she said, and so he had to devise an enclosure to ensure the hygienic integrity of the bottling line. Here, aesthetics once again had trumped functionality. I asked Gaia if her father had patented the system. No, she said. Why would he?

3 thoughts on “Angelo Gaja in Bolgheri: Oedipus and the winery as a work of art”

Leave a Reply to Do Bianchi Cancel reply