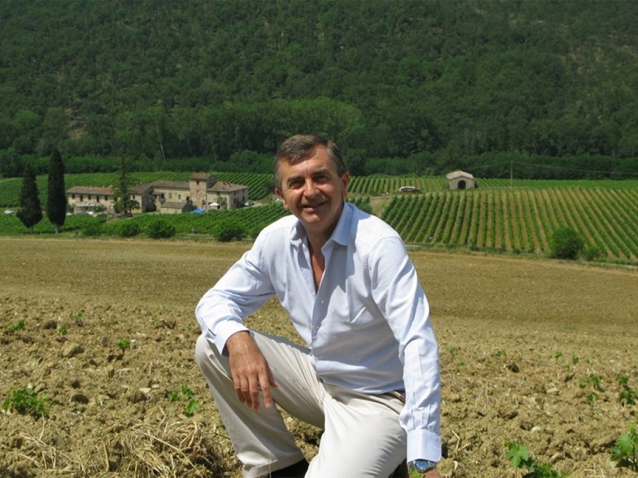 Next Thursday, August 6, I’ll be presenting a virtual wine dinner and guided tasting with Chianti Classico producer Francesco Ricasoli (above).

The event is part of an ongoing weekly series hosted by Roma in Houston (one of my clients). Check out this Houston Chronicle write-up on the dinners, which appeared yesterday on the paper’s website.

Last night, our featured guest was my good friend Paolo Cantele who joined from Lecce, Puglia. Francesco will be joining from his offices at Brolio Castle in the heart of Chianti Classico.

I first met Francesco more than a decade ago when I was searching for a letter written by his ancestor, the “Iron Baron” Bettino Ricasoli, united Italy’s second prime minister and the architect of the Tuscan wine renaissance in the second half of the 19th century.

The celebrated letter in question included Baron Ricasoli’s historic “recipe” for Chianti Classico (more on that later; there are a lot of misconceptions about what he actually wrote). But more importantly, his reflections on Sangiovese firmly established the variety as the quintessential Tuscan red grape. In more ways than one, it created the model — the marriage of Tuscan soil and grape — for Sangiovese wines like Brunello di Montalcino, among others. And today, as the new wave of Chianti Classico comes into focus, Francesco has continued his family’s legacy as Tuscan viticultural pioneers with his groundbreaking work on Chiantigiana subsoils and cru designations.

Francesco and I have stayed in touch over the years and I had the great fortune of meeting and tasting with him in January during my last trip to Italy before the pandemic. He is one of Italy’s most fascinating winemakers imho and his work is as compelling as his wines are delicious.

I couldn’t be more thrilled to be presenting him and his wines next week here in Houston. I hope you can join us.

Next week, I’ll share the story of the letter (which has now been republished), its legacy, and my fascination with it.

As wine, food, and lifestyle writer Emma Balter wrote for the Houston Chronicle this week, these virtual dinners are a lifeline for the restaurant and all the families it helps to support, including my own. The events are a lot of fun and provide a much needed respite from the pressures and stress of life in the U.S. right now. Thank you for your continued support. Click here for a preview of next week’s dinner.