Update, Friday, November 2: Thanks to everyone who contributed to our Go Fund Me campaign, part of our protest of the newly erected Confederate Memorial in Orange, Texas. It only took us two days to meet our goal of $1,000. Thank you! It means the world to us to know that you support us in our efforts! 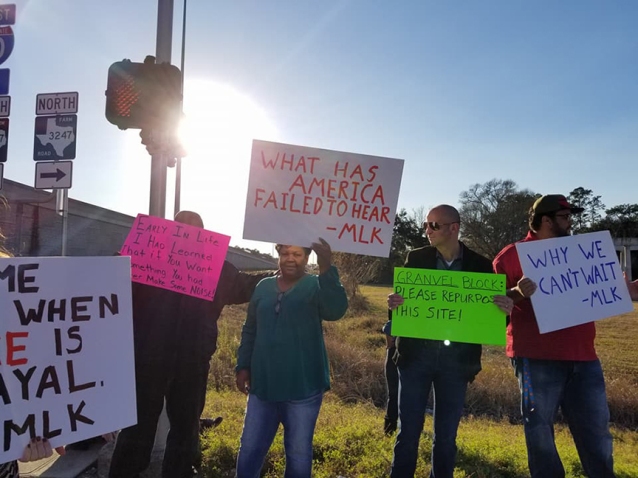 Please donate to our campaign here.

The next protest is scheduled for Saturday, November 10, 2-4 p.m. Click here for details. Please join us.

Tracie and I are raising money to buy one (1) month of advertising on a billboard that stands across the road from the newly erected Confederate Memorial of the Wind, a monument built by the Sons of Confederate Veterans on Martin Luther King, Jr. Dr. in Orange, Texas along Interstate 10.

The monument displays Confederate battle flags, including the “Confederate Flag.”

The City of Orange, the local business community, and even a group of local pastors have asked the Sons member who organized the monument’s construction, Granvel Block, to consider repurposing the site. But he refuses to engage in dialog.

Given the demographics of Orange and the legacy of Jim Crow there, it’s clear that the conspicuous display of the Confederate Flag doesn’t reflect or align with community values. The monument’s prominent location (along a major road that leads into town, just a few freeway stops west of the Louisiana border), makes it highly visible to drivers as they arrive in the state heading west. See the photo below, taken this week by an Orange resident.

(Read a recent Houstonia magazine article on the monument here.)

The content of the billboard will include an appeal to local residents and drivers to ask the Sons to repurpose the site. It will also include a link to a blog I’ve created to document our efforts, RepurposeMemorial.com.

My hope is to have the ad up by the end of next week. And I have already contacted the outdoor advertising company that owns the billboard to get the artwork and ad approved.

Tracie and I have been protesting the memorial since December 2017 and we have no intention of giving up on our cause: to remind the residents of Orange (where Tracie grew up and where her family lives) that it’s socially unacceptable to display images like the Confederate Flag in such a conspicuous location and fashion, with no regard for the values and feelings of the greater community.

We cannot thank you enough for your support. We’ve had so many residents thank us publicly and privately for our protests. We are wholly convinced that we need to speak out on this issue.

Please donate to our campaign here. 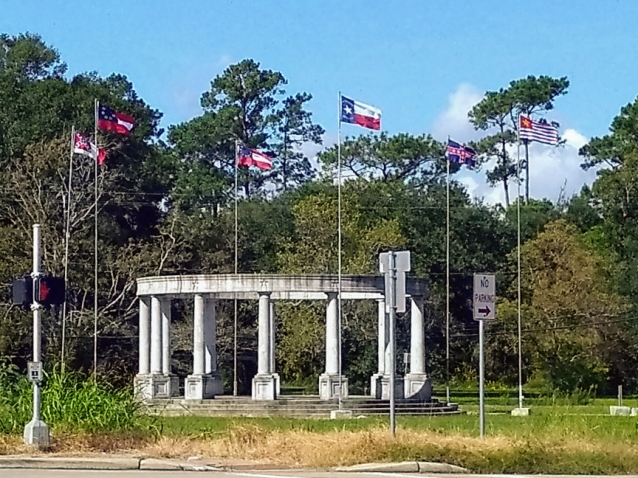 12 thoughts on “Help us protest the new Confederate memorial in Orange, Texas: GoFundMe goal of $1,000 to purchase billboard ad”

Scenes from the @slow_wine_guide tour in Austin this week. Thank you Slow Wine for coming back to Texas! Safe travels to all. @gianpaolo.giacobbo so fun hanging with you brother. Looking forward to when you come back to our state.