After the Israeli daily Haaretz reported that carciofi alla giudia, the famous fried artichokes of Rome’s ancient Jewish ghetto, had been ruled traif by Israeli chief Rabbinate, the owners of Houston’s Mascalzone swiftly added the dish to their menu.

She’s Israeli and he’s a famous Italian boxer. And I help out with their online media.

100 percent delicious and I’m extremely proud of the photo above, which I took with my phone. 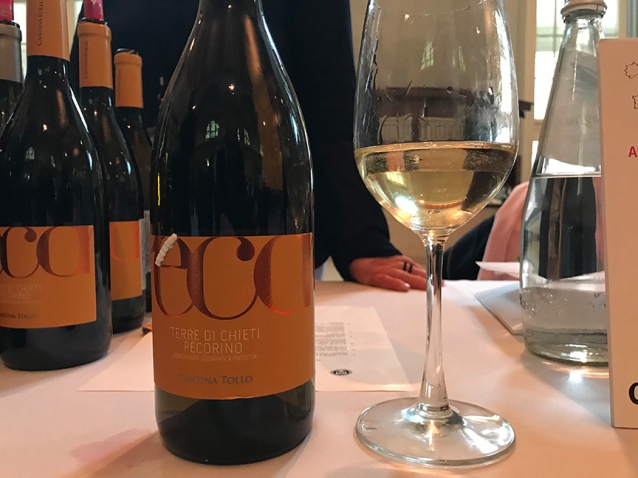 Gambero Rosso was back in town this week with their traveling road show.

I really loved the Tollo Pecorino (above), a first kiss for me.

Pecorino can be a one-trick pony but when it’s handled thoughtfully, it can really deliver nuanced flavor. Great wine, one of the best expressions of Pecorino I’ve ever tasted.

Another stand-out discovery for me was the Costanzo Etna Bianco di Sei (above).

Everyone’s so crazy about Etna red and rightly so. But Tracie and I are mad for Etna white.

This wine delivered the spectrum of flavor and minerality I’ve come to expect from the top producers in the appellation. What a fantastic wine.

And just in case you were worried that we weren’t eating and drinking well in our adoptive city, Tracie and I attended a dinner last night hosted by Chef Marco Sacco (from restaurant Piccolo Lago in the Lake District, 2 Michelin stars) at a new event space launched by an Italian gazillionaire here.

Chef Marco (above, left) and his sous chef Silvestro had been flown in especially for the dinner. I was the night’s emcee.

Not a bad gig… but not as good as Sergio Scappani’s. He had also been flown in from Italy to dazzle the guests with his midified Roland V-Accordion FR-7X (stage left).

And just in case you still haven’t been tuned in to our groovy food and wine scene, check out this profile of one of my favorite wine programs in the city, Matt Pridgen’s wine list at One Fifth (by my friend Megan Krigbaum, one of my fave wine writers, for PUNCH).

Still not convinced? Hit me up and I’ll hip you to my fave spots.. Seriously. And thanks for reading!