From the department of “nice work if you can get it”… 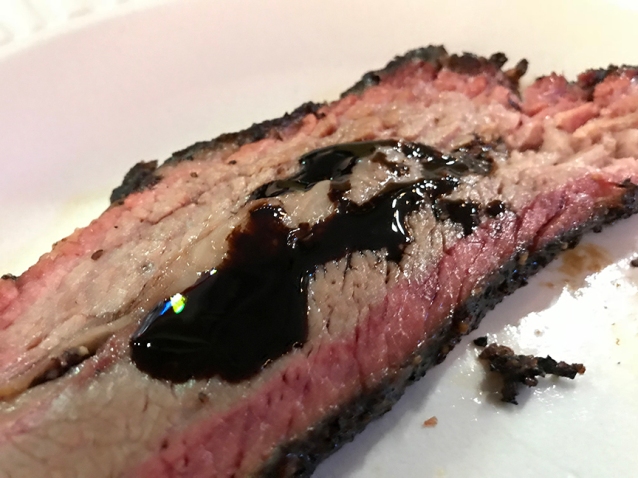 Above: the sacred and profane, a slice of juicy Texas smoked brisket topped with 12-year aged Traditional Balsamic Vinegar from Reggio Emilia (I’ll leave it up to the reader to decide which is the profane and which the sacred).

I’ve always been a big believer that Lambrusco is not only the best wine to pair with Texas bbq but that it should also be adopted as the state’s official wine.

Refreshing, served cold, low in alcohol, with more tannic character than people realize, sweet with residual sugar even when people call it “dry,” Lambrusco mirrors in more way than one the sweet tea that is traditionally served with smoked meats in Texas.

Yes, beer is also a traditional pairing for bbq. But most beer doesn’t have the sweetness that can work so well with the smoky and often spicy character of the food.

When my wife Tracie and I first attended church “feeds” hosted by my father-in-law’s congregation in Orange, Texas on the Louisiana border, I tasted sweet tea with homemade bbq (no one in Orange goes “out” for bbq, btw). And that’s when I started to look to Lambrusco as the ideal match.

Above: on Monday, March 5 in Houston, J.C. “Chris” Reid and I will be leading a seminar on bbq and Lambrusco pairing at the Italy-America Chamber of Commerce Taste of Italy festival. Stay tuned for details on that.

The evolution of Texas bbq over the last 10 years is nothing short of incredible. When I first moved to Texas in 2008, the bbq revolution was just beginning to take shape. Today, you can find Texas bbq across the U.S. and even in Europe. And it’s not Kansas City, Carolina, or Memphis. It’s Texas bbq — religiously smoked, “low and slow” — that has proved to have such appeal across the world.

With its new international standing and profile, it’s only natural that we should start to look for the right wine to pair with this indigenous and truly unique gastronomic tradition.

On Monday, March 5 in Houston, Chris and I will be leading a seminar on bbq and Lambrusco pairing at the Italy-America Chamber of Commerce Taste of Italy festival. Jackson St. will be one of the smokers providing the food pairings together with another couple of Houston standbys.

And Texas brisket and traditional balsamic vinegar you ask? I’ll also be moderating a panel that day on classic and creative applications of the sticky icky and utterly delicious stuff.

It’s nice work if you can get it, ain’t it? Stay tuned for details and hope to see you March 5 in Houston at Taste of Italy!