Above: the Zonin winery in Vicenza province, Italy. The Zonin winery group owns estates in Veneto, Piedmont, Tuscany, Sicily, and the U.S., among other properties.

Italian wine mogul and banker Gianni Zonin made headlines in Italy last July when he was spotted shopping with his wife in Milan’s exclusive Via Montenapoleone commercial district. At the time, the 80-year-old ex-president of the failed Banca Popolare di Vicenza was under investigation for stock manipulation and obstruction of regulatory authorities.

When the investigators published their findings the following month, they reported that 118,000 clients lost their savings when the Banca Popolare di Vicenza collapsed.

The European Central Bank “euthanized” the Vicenza bank less than two weeks before the Zonins’ shopping spree (New York Times). Gianni Zonin had been its president from 1996 to 2015. (Read an English-language account of the initial probe by Reuters here.)

Zonin and his family made headlines again this week in the Italian media when it was reported that Italian authorities had seized a mere 346,000 euros from the ex-banker in the wake of the financial scandal.

“A drop in the sea,” was how Giulio Romani, Italian Trade Union Federation (First CISL), described it. “It barely corresponds to 34 percent of Zonin’s more than 1 million euro salary in 2015,” the last year he served as the bank’s president.

In another report published in the Italian media earlier this week, financial investigators reported that in order to protect his fortune, the winemaker transferred ownership of “‘nearly all of his property’ to one of his sons and his wife in two transactions on January 15 and May 13, 2016.”

According to Italian Magistrate Roberto Venditti, the judge who ordered the seizure, “the accused [Zonin] gave the majority of his financial assets to family members over the course of two years.” 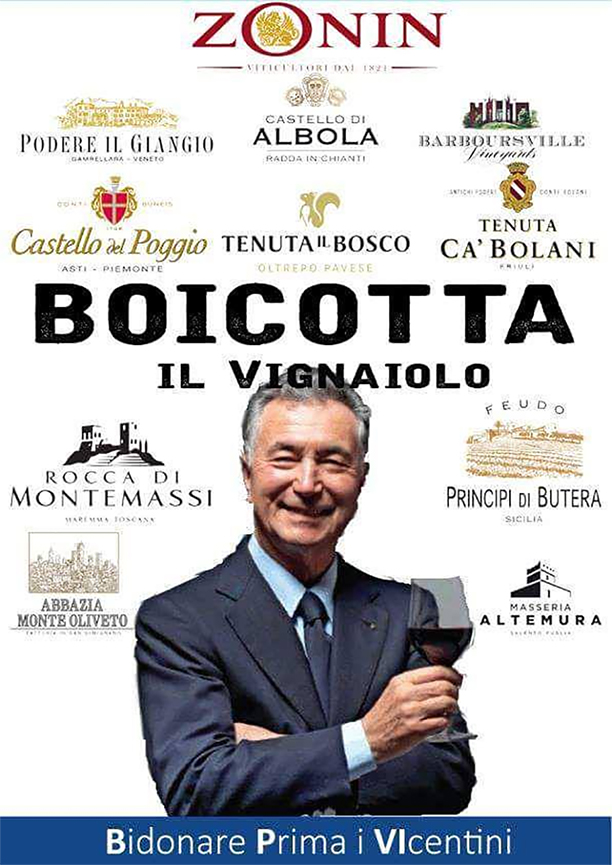 Above: “Boycott the grape grower,” a flier featuring winemaker and ex-banker Gianni Zonin, posted on the Noi che credevamo Nella Banca Popolare di Vicenza Facebook page. The caption at the bottom is a play on the bank’s acronym, BPVI. Translated it reads, “swindle Vicenza residents first.”

The Zonin winery group owns estates in Veneto, Piedmont, Tuscany, Sicily, and the U.S., among other properties. The family’s wines are widely available in North America, including its popular Prosecco, which retails for roughly $13 according to WineSearcher.com. With offices in Charlottesville (VA) and Miami, the family’s Zonin USA is one of the largest wine importers in the country.

See these Reuters profiles of bank clients whose savings were wiped out when the Banca Popolare di Vicenza collapsed on Zonin’s watch.