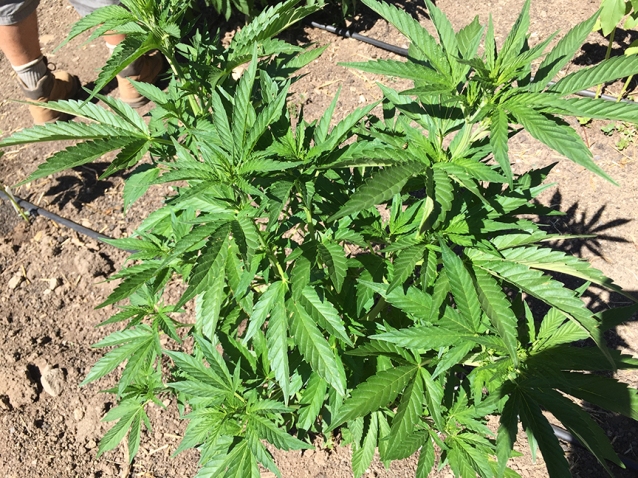 Above: cannabis grown on a private biodynamic farm in Sonoma, California. I spent the day yesterday in Sonoma county touring some of the damage from the wildfires.

He’s concerned that legal recreational cannabis, which goes into effect in California in January 2018, will eclipse the sales of wine.

Earlier this week, he wrote that “cannabis is bad for wine.” He quotes a new and widely reported study whose authors claim that “alcoholic beverage sales fell by 15 percent following the introduction of medical marijuana laws in a number of states.”

And just today on his blog, he included “Cannabis and Wine” as one of the top 10 “wine stories” of 2017 (leave it to Tom, a blogger and writer I admire greatly, to nail it when it comes to listicles).

“Some [in the trade] like myself,” he wrote, “have been looking closely at the degree to which cannabis will cannibalize sales from the wine industry.” (Great parononmasia!)

Save for linguistics (a sine qua non tool in any self-respecting philologist’s gearbox), I’m not well versed in hard sciences like psephology. I can’t counter the results of studies like this one, which came to my attention via Tom’s blog (which I highly recommend to you btw, one of the best wine blogs out there).

But I can speak from personal experience. Like many in the industry (see this article by Eric Asimov for the New York Times), I don’t see cannabis as a threat to wine sales or consumption because pot smoking is already pervasive among grape growers, winemakers, and wine consumers. And it’s been that way for decades.

The fact that recreational cannabis will soon be available for retail purchase won’t change the robust cannabis culture that already exists across the United States — most vibrantly in California, where I grew up and where pot and wine are woven into the fabric of everyday consumption since the 1970s when I was a kid.

I’ve got news for white bread wine lovers: Americans love pot, they have for generations, and even though some Americans still associate it with sinfulness (like Tom, who calls it a “sin industry”), pot culture is an all-American tradition — from San Diego to Austin, from Portland to New York City, from Seattle to Boca Raton. The fact that it’s now becoming part of the mainstream business community doesn’t really change much in the way that I or hundreds of my colleagues and peers will consume cannabis (after all, you can’t write business without writing sin).

I’ll never forget when, in 2010, then Governor Rick Perry said: “if you don’t like medical marijuana and gay marriage, don’t move to California.”

I’ve got news for you, Rick. It’s not just coming to a town near you soon. It’s already there…

Check out Tom’s blog. It’s a daily read for me and one of the best wine blogs out there.

3 thoughts on “Do pot smokers drink less wine? I don’t. But am I your average cannabis consumer?”