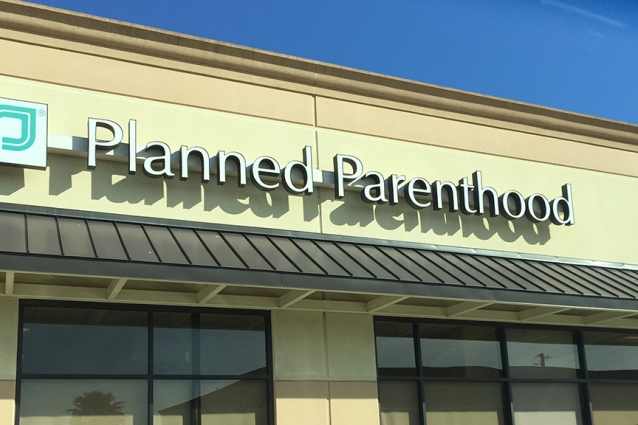 Above: a Planned Parenthood clinic in Houston. The health centers offer reproductive health care to economically challenged citizens, including the Parzen family.

Back in August 2012, as Texas geared up for the presidential election, the Lubbock County Judge, the Honorable Tom Head, told MyFoxLubbock.com that President Obama:

“‘[is] going to try to hand over the sovereignty of the United States to the U.N., and what is going to happen when that happens?’ Head asked, according to MyFoxLubbock.com. ‘I’m thinking the worst. Civil unrest, civil disobedience, civil war maybe. And we’re not just talking a few riots here and demonstrations, we’re talking Lexington, Concord, take up arms and get rid of the guy.'”

“Head went on to predict that if that happens, Obama will ‘send in U.N. troops.'”

“‘I don’t want ’em in Lubbock County. OK. So I’m going to stand in front of their armored personnel carrier and say ‘you’re not coming in here,’ he said, adding he wants ‘trained, equipped, seasoned veteran officers to back me.'”

Back in July 2015, Texas Governor Greg Abbott asked the Texas State Guard to monitor the U.S. military training operation known as “Jade Helm 15.” He was reportedly concerned, like many Texans, that the exercise could be an a veiled effort to disarm state residents and set the stage for a federal or perhaps foreign takeover.

“‘During the training operation, it is important that Texans know their safety, constitutional rights, private property rights and civil liberties will not be infringed,’ Abbott wrote to Maj. Gen. Gerald Betty, saying he expects ‘regular updates on the progress and safety of the Operation.'”

Read about his reaction to Jade Helm 15 in Texas on the Texas Tribune website.

When Trump America came up in conversation at a dinner party in Houston on Friday night, one of the guests asked rhetorically (and approvingly): “Why should we [taxpayers] be paying for people’s abortions? And why should we be paying for abortions in foreign countries?”

She was referring to Republican efforts to defund Planned Parenthood and to President Trump’s executive order executive order that reinstated “a Republican policy that would ban U.S. aid to groups that provide or promote abortions overseas. Known as the ‘Mexico City policy’ or the ‘global gag rule,’ the measure came one day after the 44th anniversary of the landmark Supreme Court Roe v. Wade case that legalized abortion across the country.”

Read about it on The Daily Caller (as linked to by FoxNews.com, which devoted a scant 60 words to the executive order).

Over the weekend, we learned that Norma McCorvey passed away. She was the “Jane Roe” in “Roe v. Wade,” the landmark Supreme Court case that made abortion legal in the United States.

Few will remember that McCorvey was born in Louisiana but raised in Houston. She was living in Texas in 1973 when the case was decided by the court (it was first argued in 1971). She died on Saturday in Katy, Texas about 30 minutes from where we live. She was 69.

Read about her life in the Wikipedia entry devoted to her. While her case was pending, she had the child (and never had an abortion). Ultimately, she became an anti-abortion activist.

Before I moved to Texas in 2008, I didn’t realize how much of what happens in Texas affects and has historically affected the other states of the union.

Remember when a single (Obama-appointed) federal judge in Texas granted a preliminary injunction that blocked Obama’s overtime eligibility regulation? It feels like a lifetime ago but it actually happened in November 2016 (Politico).

After Obama took office in 2009, the state of Texas “sued his administration at least 48 times, according to a Texas Tribune analysis of state data — a point of pride for the state’s Republican leaders” (Texas Tribune).

Sadly, so much of what happens in Texas doesn’t stay in Texas. And it looks like we are in store for at least four years of Trump America’s Texasification of our nation. The bookends of Norma McCorvey’s life seem unheimlich in the light of our country’s new direction. The tragedy is that some Texans often believe the most darned things…