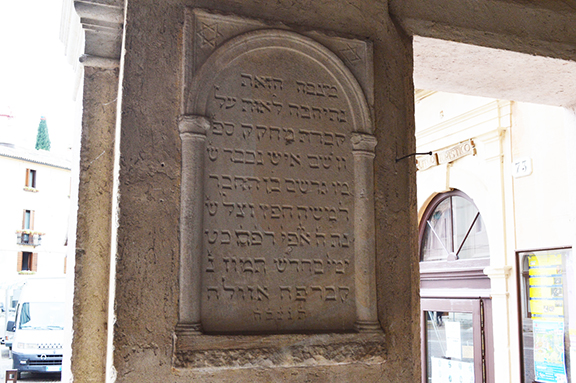 There are few things that I do well in life. But one of them is my ability to speak Italian with near native-speaker fluency.

Whenever I travel to Italy (I’ve already been twice this year), I interact with Italians seamlessly. And while my foreign accent is often discernible, many Italians compliment me on my language skills.

“You must be Italian,” they say.

“Well, you must have Italian origins,” they counter.

“No, io sono ebreo,” I explain, “I am a Jew. Nearly all of my great-grandparents fled Eastern Europe — Russia and Poland — before the Russian Revolution and came to the U.S.”

This information is often met with surprise. My semitic features are easily confused with Mediterranean physiognomy.

“When asked why he spoke so many languages so well,” I tell them, “the famous Russian-born linguist Roman Jakobson would answer, ‘je suis juif’ (I am a Jew).”

Don’t get me wrong: I am NO Roman Jakobson. He was one of the most brilliant minds of twentieth-century linguistic theory and his work reshaped the field and informed a generation of linguists and critical theorists who followed him. One of his greatest achievements was his theory of the “six functions of language.”

But it is true: Russian Jews are known to possess a gift in second-language acquisition.

Except for those who have traveled in the U.S., most Italians I meet in Italy have never met a Jew (btw, I prefer Jew over Jewish person, although I recognize and appreciate that many use the euphemism Jewish person to avoid saying Jew, which, in another era, could be interpreted as having a pejorative meaning).

There is a long tradition of admiration for Jews in Italian literature. It stretches back to Dante and Boccaccio, both of whom wrote about Jews in medieval culture in a positive light. Dante, for example, was a great admirer of the Roman-Jewish poet Immanuel Romano, who wrote in Hebrew, Latin, and Italian.

Many of Italy’s greatest twentieth-century writers were Jews: Carlo Levi, Primo Levi, Giorgio Bassani, and many others.

But today, more often than not, Italians have little contact with Jews aside from the American Jews they meet in Italy.

When I visited Asolo for the Asolo and Montello Consortium wine festival last month, I was reminded of another era in Jewish history when Jews played an important role in Italian mercantile and intellectual life.

In Asolo, there was a vibrant Jewish community and center of learning during the Venetian Renaissance. Like the Jewish communities in Venice and Padua, it was part of a movement in the historic “renewal of learning” in Europe until it was wiped out in the “massacre at Asolo” in 1547. The famous Cantarini family was among those who perished in the tragedy.

The Hebrew inscription in the photo above is a sixteenth-century tombstone that has been embedded in one of the walls of the Loggia del Capitano in the historic center of Asolo. I believe — although I’m not certain — that it was moved there from Asolo’s Jewish cemetery in the late nineteenth century, when there was a renewed interest among Italian scholars in Jewish communities in the Venetian Renaissance (at least, this is what I gauge from my research).

I recently asked Rabbi Yerachmiel Garfield of the Yeshiva Torat Emet (here in Houston, not far from where we live) to translate it for me. Here’s what he wrote:

This monument serves as a sign for the burial of the lawgiver [is poetic language taken from the Torah’s description of Moses burial place — it literally means “lawgiver” — but it has been used since to refer to the burial of an important personage or man of importance], Gershom son of the chaver [an honorific used primarily in Germany to denote a certain standing in the community]. R[ebbe] Gershom son of Moshe Chafetz of blessed and holy memory. 1528 [C.E.]

I had seen the inscription many times before but I had never sat down to figure out what it meant or why it was there.

Thanks for letting me share it with you here.