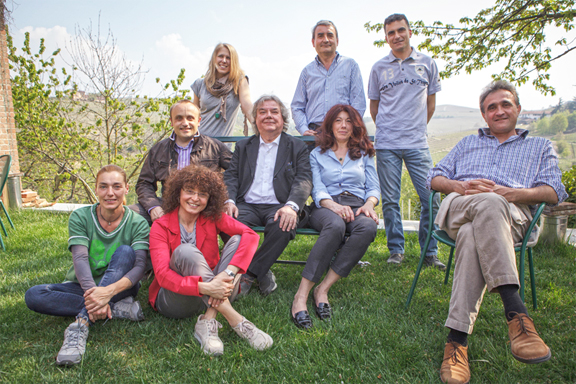 “For the first time in the history of the Italian Republic,” writes today Alessandro Morichetti for the popular Italian wine blog Intravino, “a civic list comprised of grape growers has been born in Barolo with [Vittorio] Toio Manganelli as mayoral candidate.”

A lista civica (a civic or municipal list) is “a party list presented at an Italian local election which has no official connection with a national political party and which campaigns on local issues” (Wiki).

It’s commonly formed around a central candidate. In the case of the newly formed Uniti per Barolo (United for Barolo), Vittorio “Toio” Manganelli, a noted Langa enogastronome and cultural entrepreneur (pictured above, center), is facing off against Barolo village superintendent Renata Bianco in a race to become mayor in the township’s upcoming elections (May 25, 2014).

The group’s slogan is “transparency, engagement, and equality in rights and responsibilities.”

Loved this white Rioja from “Paco’s picks” on the list. What an amazing restaurant. @tracieparzen loved it too. #nokids