When it comes to food and wine pairing, one of my favorite motti is owed to New York restaurant legend Danny Meyer: if it grows with it, it goes with it…

It’s what I call the “sheep poop theory”: you want to pair the wine with the cheese made by the sheep that poop in the field next to the vineyard where the wine is raised. Now, that’s what I call terroir!

The other night, when some friends brought an excellent bottle of 2006 Terenzi Cesanese del Piglio from Latium to our favorite BYOB joint in Austin (the name of which I cannot reveal lest it cease to be our best-kept secret), we asked the chef to whip up one of the simplest and most delicious dishes in the world, classic Roman cacio e pepe, long noodles tossed with Pecorino Romano and freshly cracked pepper. 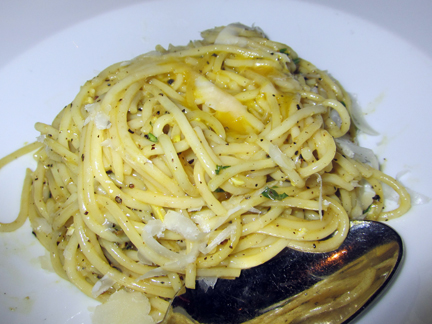 So little Cesanese makes it to the U.S. these days and sadly, none — save for that which is smuggled in — makes it to Texas.

With its classic black pepper notes, it’s as if this wine were created expressly to pair with cacio e pepe. I thought the wine showed brilliantly: red fruit on the nose and in the mouth, zinging acidity (despite its age), and pepper, pepper, pepper combined with a gently chewy mouthfeel… Delicious…

Does anyone know of a Cesanese available here? It’s such a great summer red and I drink it any chance I get!