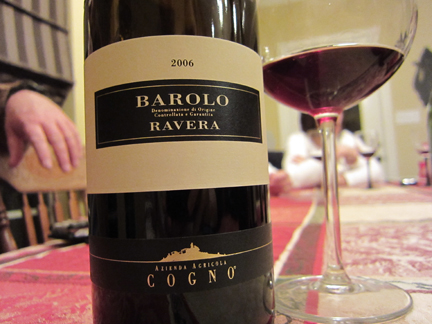 For our Christmas day meal in Orange, Texas (at sister and brother Misty and Ricky’s house), we opened this bottle of 2006 Barolo Ravera by Cogno (sent to us by winemaker Valter Fissore).

While I’ve tasted a lot of 2006 Barbaresco at this point, this was one of the first expressions of 06 Barolo that I got to spend some time with. The more and more 06 I taste, the more I’m convinced that this is going to be a fantastic vintage for Langa wines, despite the controversy stirred in 2008 when B. Giacosa decided not to bottle his 2006).

06 may not be as great as 01 and 04, but it’s an indisputably balanced, classic vintage, where people who make and made honest wine are going to be rewarded for their faith and integrity.

I was stunned by how good Valter’s 05 Ravera was: beautiful nose, bright acidity, and a great balance of earth and fruit. Chapeau bas, Valter!

The other star of the Christmas day meal was this 2004 Vinsanto by Boutari, also sent to me as a sample (for the Boutari Social Media Project, which continues in 2011). At a youthful 6 years out, this wine showed the depth and complexity that the appellation in known for, with a gorgeous balance of candied white stone fruit and saltiness. The Assyrtiko grape and its unique expressions, whether vinified as a dry or dried-grape wine, continue to fascinate me and the Boutari Vinsanto is one of my favorites (for the record, it’s actually a blend of Assyrtiko and Aidani, which imparts a wonderful aromatic character to this wine). Tracie P and I have been blown away by how well new oak and small cask aging works with Assyrtiko and in this case, the wood gives a nutty counterpart to the fruit and salt (the label reports that the wine was bottled in 2008, leading me to believe that it spent nearly 4 years in wood). I also love how this wine clocks in with a judicious 12% alcohol, remarkable for the dried-grape category but in line with overarching attitudes among Greek winemakers. Great stuff…