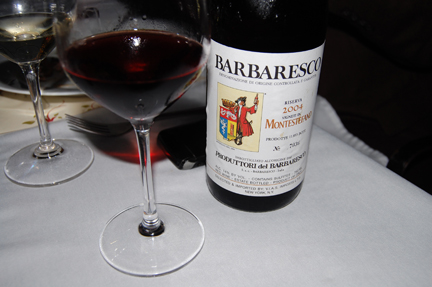 Above: I love it when you drop in on someone and they just happen to be opening single-vineyard designated Produttori del Barbaresco!

Yesterday, while meeting with Tony in Houston, one of his clients asked me, “if you could only choose one Italian red wine to recommend for value and quality, what would it be?”

Anyone who follows our enological adventures knows that I didn’t skip a beat in answering Produttori del Barbaresco.

It’s a winery that truly speaks to me and Tracie P: its traditional-style bottlings of Nebbiolo — Langhe Nebbiolo, classic Barbaresco, and single-vineyard designated Barbaresco — are wonderful expressions of earth, fruit, and acidity. And thanks to the agricultural cooperative social experiment launched by a Barbaresco priest in the 19th century and carried forward into the 21st by winemaker Aldo Vacca and his team, the wines remain extraordinarily affordable. In our modest library of wines that we’re cellaring (appropriate for a couple with middle-class means), Produttori del Barbaresco is our flagship. A luxury wine even Gramsci would approve of! 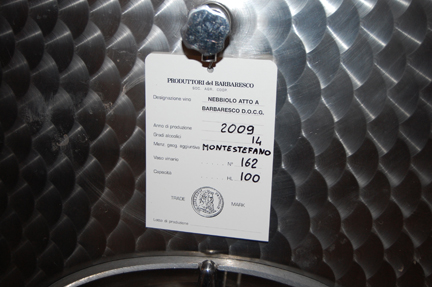 Above: Winemaker Aldo Vacca vinified his crus separately in 2009, as he regularly does in vintages he deems good enough. Whether or not he will release it as a cru-designated wine is another question. I snapped this photo in March 2010 when I last visited the winery.

When I rolled into Houston town Tuesday night, early for a holiday cheer appointment with friend and blogger colleague, Food Princess, who now writes for the new Houston Chronicle aggregate lifestyle blog 29-95), I stopped by Backstreet Cafè to see if my friend, sommelier Sean Beck was around.

As it so happened, he just happened to be opening a bottle of Produttori del Barbaresco 2004 Barbaresco Montestefano to enjoy with friends. (I love it when that happens!)

After the classic Barbaresco (a cuvée sourced primarily from Ovello with fruit from crus as well), Montestefano and Rabajà are my favorite bottlings by Produttori del Barbaresco. They are among the most powerful and the richest in terms of their earthiness and savory flavors.

At 6 years out, the Montestefano is very, very young and has many, many years ahead of it. But its balance is already beginning to emerge, with the fruit still relatively muted. Back in April 2009, I asked Aldo if he would compare his 04 to the now legendary 1989 vintage. He said that yes, in fact, even though he had initially thought it more similar to 90 (in his early reports on the vintage), he agreed: 04 has that classic harmony that these wines can achieve in great vintages — earth, fruit, and bright acidity.

However young, with still attenuated fruit, the 04 Montestefano was brilliant on Tuesday night, very much in line with what I imagined it would be and brighter, in fact, that expected. Sean, next time you open a bottle, you know my number! Thanks again dude! You rock…

2 thoughts on “04 Barbaresco Montestefano by Produttori del Barbaresco, a wine Gramsci would approve of”