One Manhattan evening, top New York sommelier (and I mean, king of the hill, top of the heap) Levi Dalton (center, standing, my personal Philip Marlowe of wine) did a true mitzvah: knowing what a wonderful thing it would be for McDuff (left), BrooklynGuy (seated, center), Lyle, and me to get together, he managed to finagle a seat for each of us at vertical tasting and dinner at swank Alto with Peter Weimer, German Swiss cult Barolo producer, owner of Cascina Ebreo (Jew Farm) in Novello (Barolo).

Peter’s importer was also there, Dino, a simpatico German-speaking Turk and New York wine scene character, who also brought of a bottle of Giacomo Conterno 2002 Monfortino (see Lyle’s notes on the Monfortino). 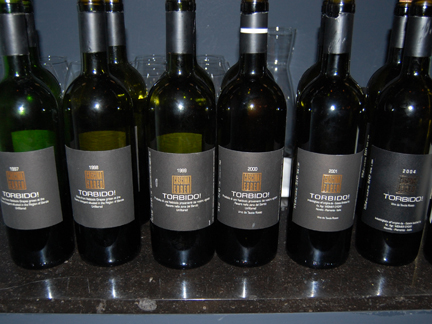 Peter’s Torbido! is an aggressively traditional wine, made with native yeasts and long maceration, unfiltered. I thought 1999 showed beautifully and the 2004, however youthful, promises to be a superb wine. The big hit of the evening was 1998, which I also loved.

It was thoroughly great to see the Jew crüe and speculation as to why the farm is called Cascina Ebreo led to colorful exegesis.

Peter and Dino took many smoke breaks during the event, prompting me to recall an old Italian joke: who smokes more than a Turk? Two Turks!

I was happy to see Dino (whom I’ve known for many years) and to get to chat and taste the wines with Peter.

And wow, whatta mensch, that Levi Dalton, for getting the gang all together…!!! It was, as Lyle put it, a “Mt. Rushmore of wine bloggers,” or, in the words of McDuff, a “meeting of the menches“…

14 thoughts on “New York Stories 5: 3 Jews, a Scot, a Piedmontese, a Turk, and 2 Swiss walk into a vertical of cult Barolo”